You may have seen the Littleton Water and Light trucks around town fixing utility poles this summer. LWL has been busy replacing older poles around town, while improving the electrical system's reliability both for today and future growth.

Littleton's Electric Distribution System consists of more than 150 miles of overhead distribution lines and more than 4,000 utility poles located throughout Littleton and Bethlehem.

Starting around 2002, LWL has planned and executed an ongoing system-wide voltage conversion/standardization from 4160 volts to 12470 volts throughout the easterly portion of its service territory.

"The majority of the work is completed utilizing LWL's own force, thereby saving ratepayer money," said Thomas Considine, LWL General Manager. "The scope and goal of this project is to improve system integrity and reliability while ensuring future electrical load growth and overall safe and dependable operations."

As old utility poles are deemed structurally deficient, they are replaced. LWL crews install new utility poles that are larger and stronger, and generally all the equipment on the pole is upgraded at the same time. On each pole, the line workers remove the old wires and install upgrade equipment such as new polymer insulators and new fiberglass arms/frames. In the past the insulators were made of glass or porcelain and when they failed it was usually due to weather. The latest equipment now attaches using Polymer insulators that are not as vulnerable as the older porcelain insulators were to the freeze-thaw cycles. 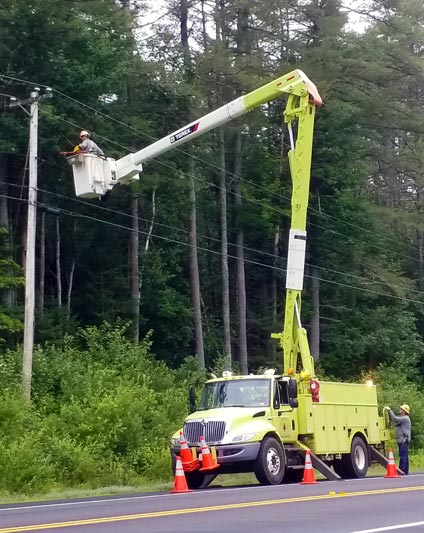 During some of the upgrade work, LWL line workers will periodically work on live or energized wires without shutting down the electricity to that area, minimizing impact to customers. Working on live wires requires line workers who are experienced, skilled, mentally focused, and properly trained and supported by knowledgeable ground personnel and others to assist with traffic control and other tasks, so the line personnel working in the air can safely and efficiently complete their task.

"This voltage conversion/ upgrade project has been ongoing; the project is expected to continue for several more years and will culminate with the replacement of the Lafayette substation operating at the higher voltage," said Considine.

The upgrade project is being done at no cost to the town's taxpayers. At the end of the year the commissioners vote to place surplus from operations into reserves. The reserves generated by the electric services are used for these types of improvements.

The Littleton Water and Light Commission was first organized by an act of the legislature in 1903 and is not an operational town department, but a self-sufficient municipal utility that receives "zero" taxpayer revenue from Littleton residents. All LWL operating activities, betterment, and capital improvements projects, such as this voltage conversion, are supported by its rate payers.

Littleton Water and Light is a not-for-profit entity governed by a three-person Board of Commissioners. The Commissioner's support management as well as establish rates, policies and procedures to ensure long-term consistent and reliable service to its customers at an affordable price.

LWL maintains a rating by Moody Investor Services and consistently receives an investment grade rating because of LWL's proficient and conservative financial management of the organization throughout the years. This investment grade rating is a major contributing factor that allows LWL to provide the residences and businesses in Littleton and its customers in the surrounding towns with some of the lowest electric and water rates in New England. Since 1903, LWL has been committed to the community with its mission to provide superior customer service and products that are safe, of the finest quality and at a fair price without being a burden on its customers and community.