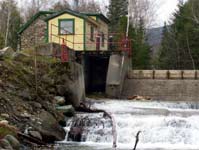 In 1887 the original provider of water and electrical power to the town of Littleton was a privately held company known as the Littleton Water Works. Through efforts of Daniel C. Remich, a member of the 1903 New Hampshire State Legislature, an act was passed authorizing the Town of Littleton to purchase the existing company which at that time consisted of two pump stations and generating plant-one near the Apthorp dam and one at the Lafayette Avenue electric station. The purchase price was $75,000. It was the 1902 outbreak of typhoid fever, attributed to the Ammonoosuc River water supply, which prompted local officials to seek a secure water source. Seven and half square miles of drainage area on the side of Mt. Garfield located in the towns of Bethlehem and Franconia were purchased through a $200,000 bond issue. The eleven-mile pipeline to the Railroad Street Chlorinating Station, laid in 1903, services the town to this day.

In 1961 an artesian rock well was developed as a supplemental backup water supply. Further improvements included a new 1,500,000 gallon water storage reservoir and pumping station on 1969; industrial park improvements in the 1970 and 90's; improvements to the dis-infection facility in the 1990's; and finally continued aggressive replacement of small diameter galvanized pipes and services with emphasis on establishing loop feeds in the distribution system.

Electricity was originally generated by a hydro-plant and dam at Apthorp Station, but beginning in 1926 the Littleton Water and Light started purchasing part of its power from the Bradford Electric Company. In 1932 power was purchased from the Connecticut River Power Company. A new hydroelectric power station was built in 1936 and remained in use until 1971. In response to the first major oil crisis in 1979 the Apthorp plant was redeveloped and fully automated under the auspices of the White Mountain Hydroelectric Company.

Major upgrades to the electrical system occurred in 1989 through 1996 with a new electrical bypass at the Partridge Lake Substation; new switchgear installed at the Lafayette Substation; and complete rebuilding and increasing capacity of the Burndy and South Street substations. With passage of a six million-dollar bond issue in December 1997, Littleton Water and Light terminated its long-term power supply contract with the New England Power Company, which enabled LW&L to buy power on the open market. As a result, Littleton Water and Light continues to offer the lowest electric tariff in New Hampshire and one of the lowest in New England.

A microburst hit the Town of Littleton in August 1998, Department Linemen with assistance from mutual aid restored system to normal within 48 hrs. The corrosion control facility was placed in service at the Gale River Intake to conform to DES Lead & Copper Rules.

2000 - Lafayette transformer was replaced due to build up of gas. Construction began on circuit 41 and the slow sand filter. Major electrical lines were upgraded on Broomstick Hill Road in conjunction with the Town of Littleton Public Works Department.

Route 18, 10" water system accepted by department in 2001. Circuit 41 (Washington Street) and the slow sand filter were completed. In November the slow sand filter was placed "in service" ending LWL Waiver of Avoidance and bringing LWL in to compliance with the Federal Safe Water Drinking Act. A new line bucket truck was placed into service (truck 5).

Circuits 42 and 43 (Union Street and Manns Hill Road) electrical contracts were completed by contract and upgraded to 15 kV in 2002. LWL acquired a 100-kVa 3-phase emergency backup generator to power its water booster station.

2003 - Construction started on the new west side substation (NH Rte 18) that will replace the Partridge Lake substation when finished. Major electrical upgrades were completed on Oak Hill Avenue and High Street in support of the Littleton High School renovations project. A new 8" water loop feed was completed that connects the reservoir at Oak Hill to Elm Street. New ITRON meter reading handheld computers were placed "in service" that are automated meter reading (AMR) capable and able to read an electric meter remotely from a distance up to 2300 ft.

Our mission is simple - to provide high quality reliable services at reasonable cost. Utility decisions are made in the best interest of the Littleton Water and Light customers and for the overall benefit of the community.